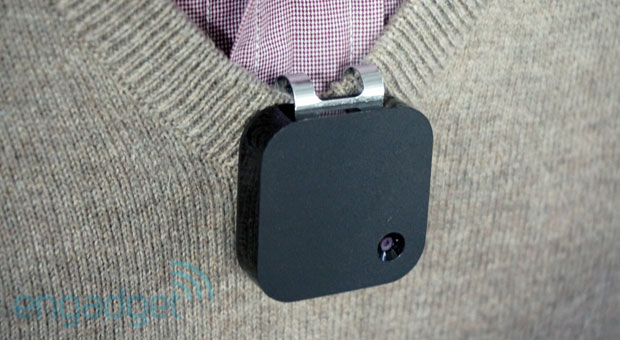 My Narrative Clip arrived last Friday and it’s now time to sum up my impressions so far. For those of you not familiar with the thing, the Narrative Clip is a very small camera that you attach to your shirt, sweather, jacket or similar and then will take one photo every 30 seconds for as long as you don’t put it face down or in a (dark) pocket. The idea is that it will help you remember what is happening in your life, and help you answer questions like ”Where were I on Wednesday, April 11th at 12 o´ clock?” or ”Who did I see last August?” Together with the device comes an uploading app for PC or Mac and a viewing app for iPhone or Android. Most of the hard work of figuring out which pictures are worth saving, calculating GPS-coordinates from raw data etc is performed ”in the cloud”, that is on Narratives servers. This is so that the minuscule battery in the device itself should be able to power it for two days or so.

So, how has the first week worked out?

Did the device help me answer those questions like what did I do and who did I see? Yes, certainly. However, there are some things that could have been better:

What about the picture quality? Well, it is not up to the standards of modern smartphone cameras. It is more like how smartphone cameras was 5-7 years ago. Still I would say it is good enough for the purpose of ”logging my life”, and in some cases I have even been surprised of the quality. Here is one example:

So, to summarise my first week with the Narrative Clip and companion apps and service: